The trajectory, of the surfer in balance, is a vector which can be modified in speed and direction. Maneuverability is the ability to modify this trajectory vector, by imbalance and return to equilibrium:

In surfing, 2 types of surfer movements, which alter the balance of lift forces, produce these trajectory changes::

These rules that play with balance are a natural logic for our body..

An "intuitive" board, technically corresponds to the ease of turning in the 3 axes Pitch Roll and Yaw (Yaw/Pitch/Roll) following our natural movements.

Reminder: In mechanics, a lever effort connected to an axis is a "moment", it is expressed in newton x meters. 1 N.m is a force of 1 newton applied perpendicularly to a 1 meter lever linked to the axis. When our toes submerge the rail, we apply a rolling moment equal to: (force pressing our toes) x (distance from the roll axis). If no opposing force balances the effort, we tip over and lose control. Fortunately, when we apply moment with our toes, a counter moment is produced by the hydrodynamic and hydrostatic forces and stabilizes the roll maneuver. A moment and its opposite moment define the equilibrium called torque. The rotational acceleration is zero when the moments are balanced in a couple..

When I turn my steering wheel slightly, I apply a moment which causes it to rotate, but I feel an opposite moment to the force I apply, otherwise it would start to turn faster and faster without any additional effort and I should quickly reverse my effort so as not to go into the background. Modern cars are equipped with power steering which could totally remove any effort on the steering wheel. But the manufacturer leaves a resisting force, so that the driver can intuitively adjust the rotation, and when you release the steering wheel it comes back to the straight position, it's intuitive ergonomics. This resistance of the system to the change of state provides stability, if the action generates a change of state which self-amplifies the system becomes uncontrollable and unstable. This "systemic" vision tells us about the character and functional limits of the board-surfer-wave system..

When we want to turn by moving our center of gravity laterally, we appreciate that the board resists a little (but not too much) under our toe in order to be able to control the maneuver, and when we release this pressure we appreciate that the board returns to its angle initial roll without having to play too much heel. To achieve this intuitive ergonomic control, without losing balance, the board must be "self stable"..

Imbalance and return to equilibrium: 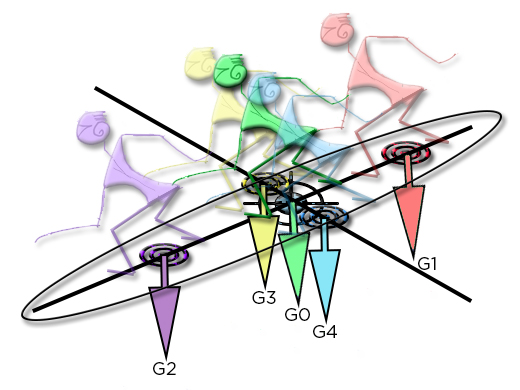 If I am in balance at point G0, it is because my fulcrum is at the center of lift. If I move my support from G0 to G3, I must feel a "counterforce", generated by the lift, which increases and limits the roll rotation, otherwise it is an unstable tilt and a fall. Same thing if I move from G0 to G2, I generate a pitching moment which must be counterbalanced by an inverse moment generated by the lift. The stronger the moment of resistance, the more stable my board. If the hydrodynamic "counter-moment" becomes lower than the moment generated by the support of my center of gravity, the forces no longer restore balance, my board becomes unstable. So let's take a closer look at the roll and pitch lever stability of our board..

The three axes of yaw, pitch and roll (yaw, pitch, roll) intersect at the point of application of the surfer's center of gravity, which we call the center of support.

For example, we have cut a board into 3 slices parallel to the relative flow, 3 elements facilitating the calculations. We can estimate the longitudinal and lateral position of the balance point based on the lifts of these elements, isolating the board along the roll and pitch axes: :

We can write the equilibrium condition in the Roll, and Pitch planes :
C1 + C2 + C3 = 0 with torque   : C (N.m) = d(m) x P(N)
This relation defines the position of the equilibrium point. The center of support of the surfer is the lever controlling the roll and the pitch. If the fulcrum moves, the balance is broken and the angle will change, this modifies the lift forces depending on the shape of the board and the speed, and recreate a balance at another angle, or not . We can assess the character of a board based on the relationship angle<=>displacement: the greater the displacement per degree of variation, the more stable the board is on this axis. We can thus evaluate the amplitude of possible displacement, laterally and longitudinally, for a surfer of given weight on a given board.

To assess the maneuverability of a board in a given situation, we must therefore show::

By drawing a map of the positions on a given board, at given speed, surfer weight and wave slope, and displaying, according to a color code, the roll angles, the trajectory curve radii and the drag forces, which define the ability to change speed and the angles of incidence that are the cause of these hydrodynamic phenomena, we obtain a "HydroScan" objectively arguing the maneuverability of a board, bare without fins. (We will explore the impact of fins separately in the chapter dealing with aileron dynamics). 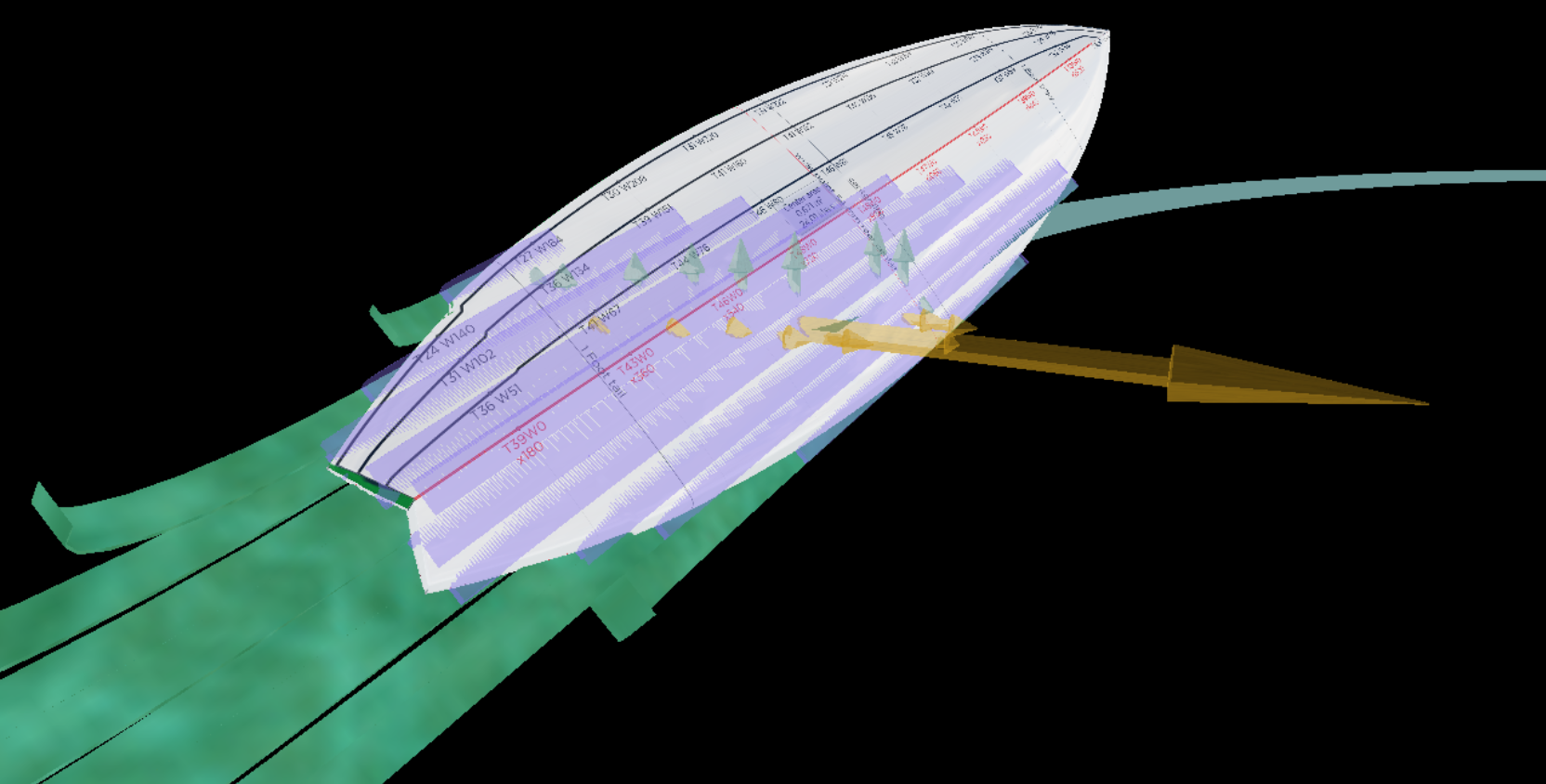 We see above, the possible balance positions (apart from these positions there is loading, loss of balance or loss of lift) of the same board at 3 different speeds. It is easy to see that the maneuverability in terms of turns is easier at low speed (first image on the left) because you can reach a very tight trajectory radius of 1.4 m (very radical!) by moving the support very little lateral, and with a roll of about 47 degrees, but beware the width of the "Roll stab width" (colored surface) is very narrow (98mm), this means that the board is really unstable at this speed. If we look at the image on the right, at higher speed we see that we gain in stable zone width (292mm), and that we can reach a high roll angle (77 degrees) producing a radius of 1.6 M.

The link between stability and maneuverability as a function of speed becomes evident in this presentation, the surfer experiences instability at low speed, and the difficulty of turning when speed increases involving carve support and engaged roll angles.

What is particularly interesting to note for the surfer and the shaper is the width of the stable zone that we will compare with another board to know if we gain or lose stability from one project to another..

Now let's take the same surfer, in the same speed conditions but on a longboard: 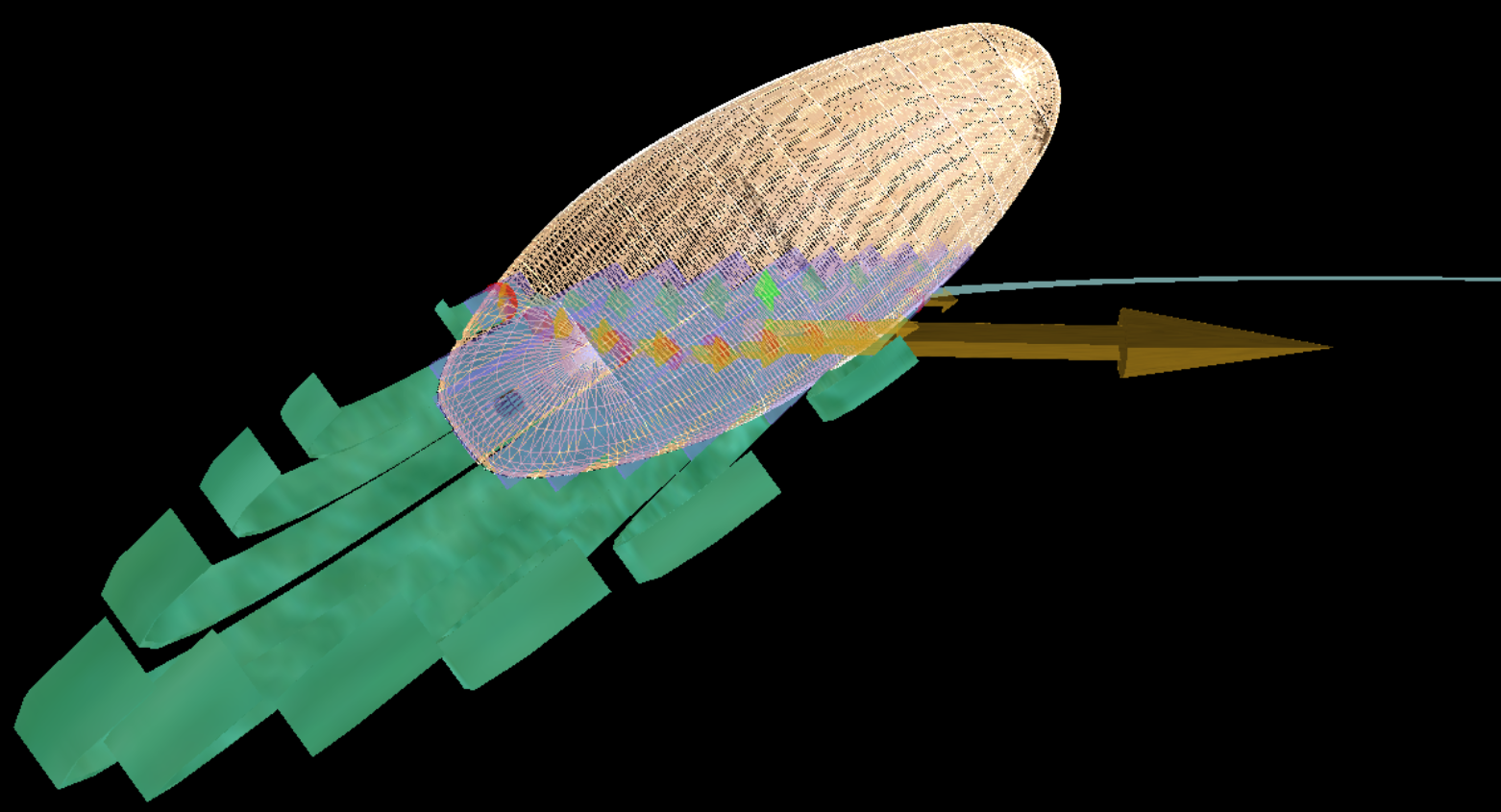 the width of the stable zone is larger, and shows the gain in stability, but we also see the radius of the curve at high speed which becomes larger We can also compare the variations of planing angles and the variations of corresponding drag forces on these two boards through the following Hydroscans...

By observing the HydroScans of the planing angles, we notice the length of the stable pitch zone (pitch stab length) which goes from 720 mm for the shortboard at 33 km/h, to 1400 mm for the longboard at 33 km/h. it will therefore take very little movement on the shortboard to vary the incidence, and therefore the variation in speed of the board, while you can walk more on the longboard without modifying the speed too much...

drag performance on a longboard

If we want to deepen our mastery of the hydrodynamics of surfing, it is important to separate the drag of friction and the drag of planing (shape), we can thus see that the longboard generates little drag of shape at low speed because it does not need much incidence to carry the surfer, so it generates less overall drag than the shortboard at low speeds, but as the speed increases the frictional drag increases more on the longboard, and one finds the minimum drag position of the longboard further back at high speed than at low speed to limit the friction surface by looking for the planing angle...

With this type of hydroscan, the surfer and the shaper are able to objectively argue the advantages and weaknesses of the various surfboard models they wish to study. The shaper and the surfer can edit these comparisons for various surfer weights, board sizes... in order to choose and select the board project best suited to their vision of surfing. 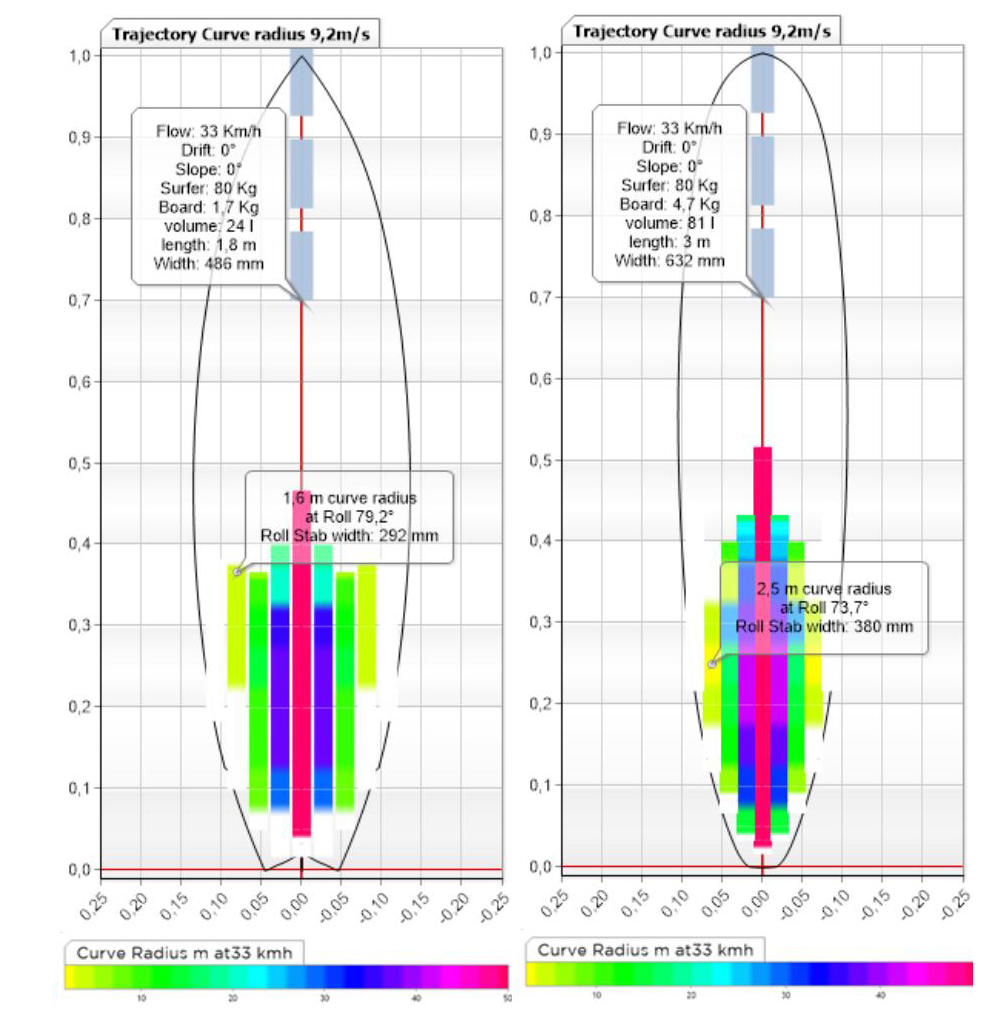 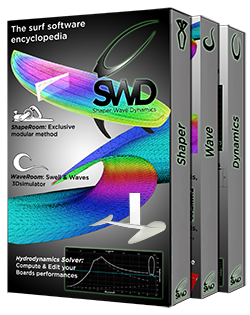